Is It Time To Go Mr Pester?

There are many newspapers and TSB customers calling for Paul Pester, Managing Director of TSB, to resign over the botched IT upgrade. For what it’s worth, we believe Mr. Pester should stay behind to clear up the mess and then, together with a number of other Senior Executives in TSB, he should consider his position. If he doesn’t, then the Board should. The Bank lost £70 million when it failed to meet its original integration deadline last year. The TSB brand is now toxic; customers are threatening to leave in their droves; small business customers are not going to touch TSB with a barge pole; compensation to customers will run into millions; fines by the Regulators could also run into millions and the political goodwill built up around TSB’s campaign for more competition in retail banking is dead in the water.

It is the biggest IT disaster in living memory and a textbook case in how not to deal with a crisis. Trying to crack a not very funny joke on national TV, when customers are having difficulties paying their bills, about the IT staff who are trying to sort out a mess you’ve created is not going to win you any friends.

Furthermore, in seeking to explain what had happened Mr Pester then made his second cardinal mistake when he tried to blame customers for the IT problems. He said: “TSB’s website app struggled with a large number of ‘concurrent users’, who tried to access their accounts on Sunday evening once the migration process was over”. TSB hadn’t planned for such usage and it didn’t have enough bandwidth to deal with all the customers logging on at the same time. If you tell customers they can’t access their accounts for two days because of an IT upgrade, it’s not rocket science to assume that when the system is supposed to be back up and running, customers are going to try and access their accounts. The fact that Mr Pester and his Senior Management team hadn’t planned for that eventuality should be a dismissible offence all of its own. Members of staff have been dismissed for much less than that.

TSB were warned about the problems. We told TSB that staff working on migration were saying to us that the new system wasn’t working properly but the Bank’s senior management team arrogantly went ahead and introduced it anyway. Now is not the time for recriminations but Mr Pester, Managing Director of TSB, Helen Rose, Chief Operating Officer and Carlos Abarca, Chief Information Officer should all be updating their CVs.

Whilst it would seem that customers can now access their accounts there are still lots of functions and services that are still not available. On its website the Bank is saying that these services and functions will either be available at ‘the end of April’ or will be ‘Coming Soon’. As one wag from the Financial Times pointed out, TSB could have saved a lot of time by telling customers that the only service working on its website was the ‘branch finder’!

TSB has spent a lot of time over the last few years telling politicians and Regulators that the UK banking market was broken and in need of reform. It is difficult to see how TSB is going to be treated seriously in future when it’s engineered the worst IT problems to hit Britain’s banking sector in years.

Nicky Morgan, chair of the Treasury Select Committee, wrote to Paul Pester on Monday to find out what had gone wrong and the extent of the failure.

Mrs. Morgan said: “This is yet another addition to the litany of failures of banking IT systems. Potentially millions of customers could be affected by uncertainty and disruption. It simply isn’t good enough to expose customers to IT failures, including delays in paying bills and an inability to access their own money. Warm words and platitudes will not suffice. TSB customers deserve to know what has happened, when normal services will resume, and how they can expect to be compensated”.

A copy of her letter to Paul Pester is shown below.

TSB’s IT problems are not just limited to its Online Banking, the branch network is on the verge of its own meltdown according to the feedback we are getting from members. Comments from members about what’s been happening are set out below:

“It has been an utter nightmare for branch staff. Systems are not working, temperamental or just not up to the job. Simple tasks take too long. Our branch has been unable to process cheques due to an issue with the voucher readers. A simple task of looking at statements does not work. There are ‘updates’, ‘fixes’ and ‘snags’ but the simple matter is that it just wasn’t ready. The dates are in Spanish on things. You have to log in to different parts of the system multiple times. With different log ins, which when they don’t work, can’t be reset. I couldn’t even cancel a direct debit today. You are told to follow the procedures, which are hard to navigate, and generally don’t work. We have piles of service bits that need sorting out.

We had customers queuing for up to 20 minutes. The IDM doesn’t work consistently, the cash point is temperamental.

We have had customers who have withdrawn money because they thought it was available, only for a lot of earmarked transactions to suddenly go out of the account that weren’t there before.  We have pushed internet banking on customers for so long, so now they are reliant on it, then we take it away.

The staff are stretched to the maximum. We all did the training, but branch staff still had customers to serve every day, so practice, practice, practice, wasn’t really possible. There are some members of staff and management who were in Saturday, Sunday, Monday (from 7.30am till 7pm) and are still there today. Diaries have been closed. Staff who interview are dreading having to negotiate the system to do appointments.

I’m IT literate. I can normally work things out, but I find the system extremely difficult to navigate. I know it should be ‘setting us free’ but that is not what it feels like. I for one will be doing a job search online tonight, which is very sad after many years service. I hope TSB realise they are going to lose not only many customers, but also many staff”.

“I feel that we have been severely let down by our leadership team. Whilst we have been fire fighting all day from 7.30am to 8pm there has been no support or even recognition of this unmitigated disaster by Paul Pester. In fact the CEO of Sabadell even came out in the press to say how well the migration had gone. It’s farcical!

In branch we have struggled with the simplest transactions including deposits, cash withdrawals, printing statements out. And today we are informed that there are to be no appointments until a week on Monday at the earliest! Fantastic customer service eh!!

The bank has, over one weekend, lost all of the reputation its staff have built up over the last 4 years. Comments on social media have lambasted both branch/telephony staff for being unable to help customers when none of this is down to us. Meanwhile we are told to use “ above the line language “ with customers.  Impossible!

I don’t doubt that things will get better with time but can’t help feeling that this will leave a black mark against TSB for a long, long time. The training was poor, no live system to practice on as we were originally promised, and the support now is fairly non existent!”

We have been inundated with feedback from members and we will cover that in future Newsletters. In the meantime, we would like to hear from members about their experiences of migration. Members can contact the Union’s Bedford Office on 01234 716029 or email us at 24hours@tbuonline.co.uk. 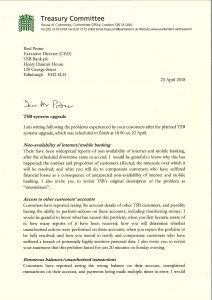 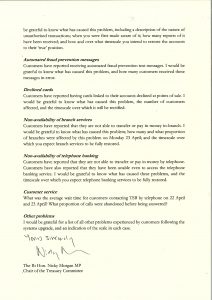