Is it any wonder that 66% of TSB staff don’t believe that they are paid fairly for the work they do when over the last 2 years they have been on the receiving end of the worst pay deals in the finance sector. And, according to the latest engagement survey results, only 29% of TSB staff feel that they receive a fair share of the profits made by TSB. Pay for TSB staff has been going backwards for years relative to other groups of staff in the banking sector but what staff will find shocking is that those pay awards have been agreed by the two in-house staff unions. They were recognised with hardly any members purely so TSB could say that they had reached pay and other settlements even though they were deals that no real trade union would ever have agreed. This agreement is the payback on TSB’s investment.

What’s needed for 2020 is an inflation busting pay pot, which will unpick some the damage done by TSB and the staff unions. Furthermore, TSB can’t be allowed to reduce the size of the bonus pot again in order to pay for the failings of senior management. None of the TSB Board, members of the BEC or their direct reports should receive any pay increases or bonuses this year.

Not A Great Place To Work

The recent results from the Partner Engagement Survey are truly shocking. Only 60% of staff trust TSB compared to the external benchmark figure of 77%. The TSB employee engagement score – which is based around 9 questions including ones on positive outcomes for the organisation and its employees, importance of work, advocacy of the organisation and willingness to go the extra mile – is 55%. External organisations that take part in the survey have an engagement score of 80%. But the TSB results don’t tell the true story because 30% of staff, an unprecedented figure, couldn’t be bothered to fill in the survey in the first place.

Some of the key results from the survey are set out below: 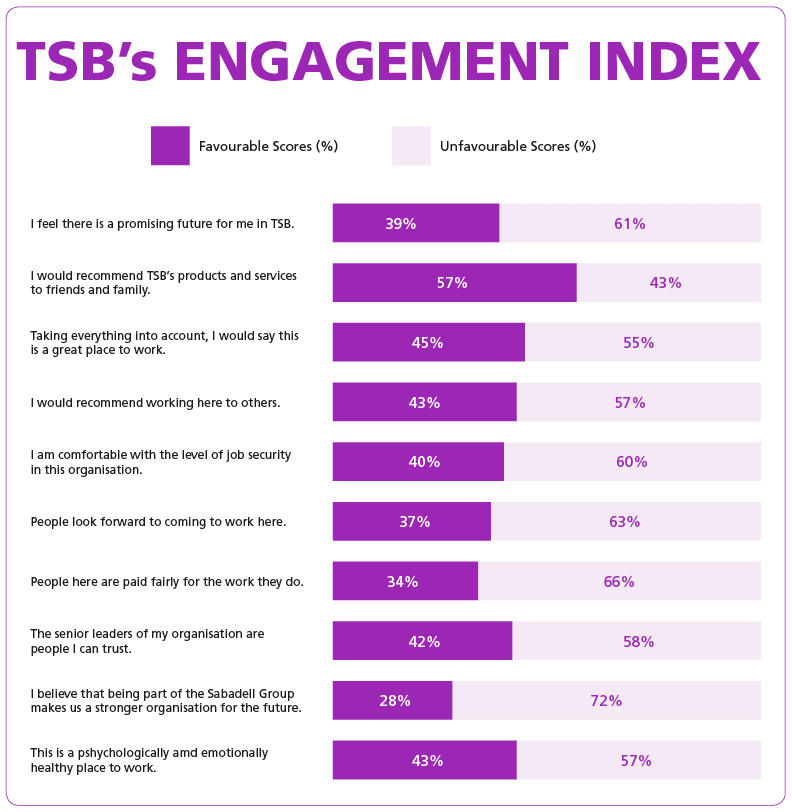 Members will recall that in its scramble to save £100 million over the next few years TSB had proposed to move the pension scheme to Legal and General and to pass on the costs of running the scheme to staff. TSB then embarked on a consultation exercise, which finished on the 30th November. Since then staff have heard nothing.

The Pensions Regulator says that TSB must consider “the responses received before making any final decision”. That’s what the bank is doing now. We expect the bank to publish the results of its consultation exercise and explain its final position. We appreciate it’s been a difficult few weeks for TSB so will give it short period of time to announce the outcome of the consultation exercise. If we don’t hear anything shortly then we will write to the Pensions Regulator and get it to intervene on behalf of staff.