TSB staff will be egregiously offended by Josep Oliu, Chairman of Sabadell Bank, complaining about the fact that he lost a few nights’ sleep at the height of the IT meltdown when they have constantly been under pressure for months trying to deal with the fallout from the botched migration. Mr. Oliu, and his Sabadell colleagues, should walk in the shoes of those staff, and only then will they truly understand the scale of the sacrifices they have made and are still making for TSB. Equally, seeking to blame the media for its coverage of the IT meltdown, calling it “cruel” and “aggressive”, sounds almost Trumpian in its naivety. It wasn’t the media that caused the Sabadell IT system not to work properly.

What was also worrying in Mr. Oliu’s address to staff yesterday was the clear implication that it was Sabadell who had decided that Paul Pester “was not part of the future solution of the Bank” and had to go. That brings into question the independence of the TSB Board from its Sabadell master and that is something we will be picking up with the FCA and PRA directly.

According to the Union’s recent survey, 65% of members said they had worked between 1 and 10 hours paid overtime per week since the migration weekend. We know from members the constant pressure of having to deal with IT problems and the reaction of customers has taken its toll on their health and wellbeing. At one stage almost 25% of staff were on sick leave in one region. In our survey we asked members to describe how they felt at the end of a typical working day during the height of the meltdown and their responses are set out in the graph below. 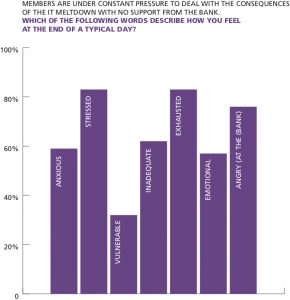 Mr. Meddings keeps trying to imply that the worst of the meltdown is over but that’s not the experience of frontline staff who are still having to deal with IT outages on a daily basis. We will be covering this issue in a separate Newsletter together with the full results from our survey.

In our last Newsletter we said that grade B & C staff would still be able to claim the enhanced overtime rates until the end of the year. However, we are aware that in some areas of the Bank, staff are being told that they can only claim time off in lieu (TOIL) rather than being paid for the overtime worked. That’s not the case. Whether overtime is paid or taken as time off in lieu or even a combination of both it must be agreed with the line manager before the work is done. If the line manager is only prepared to give TOIL, which in reality staff may not be able to take anyway given TSB’s staffing situation, staff can refuse to work the overtime on the terms being offered. Members with any problems should contact the Union’s Advice Team immediately on 01234 716029 (Choose Option 1) or they can email us at 24hours@tbuonline.co.uk.